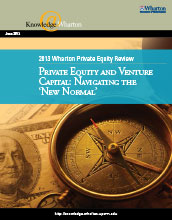 A 'New Normal' for Private Equity

Some $200 billion of new capital went to private equity and venture capital management partnerships (collectively referred to here as PE) throughout the world in 2012. For the first time, 20% of that total, some $40 billion, went to fund managers in emerging market countries. Surprisingly, of that $40 billion, only $15 billion went to the subset of emerging economies known as the BRICs (Brazil, Russia, India and China). That leaves $25 billion that went into the non-BRIC emerging markets.

So where did the rest of it go? Countries like Columbia, Chile, Peru and Mexico have seen remarkable growth. Several African countries, such as South Africa, Kenya and Nigeria — indeed, the whole of sub-Saharan Africa — have witnessed growth in the number of fund managers and the capital under management. Turkey also has emerged as a destination, as have Malaysia, Thailand, Vietnam and now Indonesia.

These new players still have work to do in improving their PE ecosystems. Management capacity building is high on the list, as are appropriate laws and regulations, tax treatment and acceptance of contractual provisions. These countries’ governments have recognized the role of PE in their industries and are motivated to make the needed changes. There is a discernible transfer of knowledge from mature economies to the emerged and emerging market PE players.

These trends are reflected in two of the articles included in this year’s Wharton Private Equity Review. One offers coverage of a panel discussion titled, “Private Equity Survival Guide: How to Survive and Thrive in Emerging Markets,” which took place at the 2013 Wharton Private Equity & Venture Capital Conference. The second, written by a team of five Wharton MBA students, focuses on the impact of the Arab Spring on private equity in the Middle East and North Africa (MENA) region.

Beyond emerging markets, this year’s review includes a piece by a Wharton MBA student that looks at how the regulatory scrutiny of the PE industry in the United States has evolved dramatically over recent years. The industry has moved from a lightly regulated, self-governing asset class to one that is coming under increasing scrutiny and reporting requirements. The author speculates on what is in store for the industry as regulators continue their investigations.

An example of international activity is presented in a case study by another Wharton MBA student, titled “Investing in Times of Distress: the Bank of Ireland and WL Ross,” which provides a detailed overview of how PE investors have played a role in the recapitalization and restructuring of troubled financial institutions.

Knowledge@Wharton then reports on another panel from the conference that addressed how PE firms create value and questioned some of the common wisdom surrounding the roles and actions of PE firms once they have acquired a company. Finally, a piece on venture capital from another conference panel then looks at the challenge of generating consistent returns and the growing allure of New York City over Silicon Valley.